“I cut ties with friends who don’t make progress and make the status quo.”

said my friend. His comment started a train of thought…about my stories.  Each of my stories takes its own journey.  They usually start from a Work-In-Progress folder.  After numerous edits, they are destined to a Story folder.  Then, after telling them and more editing, some stories make it to an A+ folder.  Sometimes they emerge with variations.  Lately, I started feeling like something is not working.

Then, I remembered a picture my brother sent me recently.  In the picture, my 10-year-old nephew’s football team was having lunch, which made me realize…

The times have changed.

It was refreshing to see boys wearing pink uniforms, which I didn’t see when I was a kid.  Generally speaking, in Japan, pink was a girls’ color back in the day.  Boys might wear pink hats if they were still in kindergarten, but not 10-year-old boys.  I don’t want to “dis” the country of my birth, but when it comes to gender equality, Japan is embarrassingly low-ranked.  Even now, it’s not unusual to hear male politicians using obsolete, discriminatory language against women.  I thought Japan would maintain its outdated status quo forever, but the picture made me feel hopeful.  The changes may be subtle and slow, but definitely, things are changing in Japan.  Maybe those boys who pull of pink uniforms see the world from different angles and treat each other with respect. 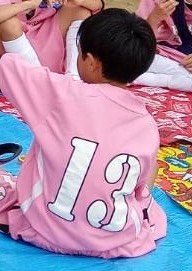 If Japan can change, so can my stories.  I don’t need a break-up with them.  I just need to give them a boost.  My stories need some make-over to come to life once again.  What does it mean?  Well, it means I need to operate big surgeries!