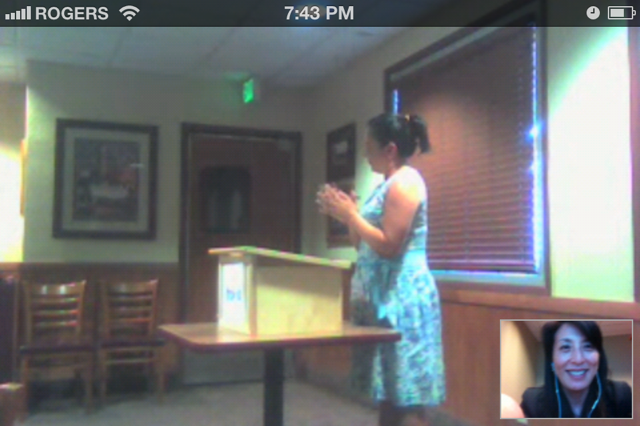 The first time I took on VP of Education for a Toastmasters club was 2011. It was such a fun experience until, in an unexpected twist, I had to leave the country due to a visa issue. Thanks to technology and the club’s support, I became a virtual VPE. I was able to coordinate and join virtual meetings without too many issues — sometimes from Canada, sometimes from Japan. I was even inducted as President virtually. When I learned that I needed to give an incoming President’s address on screen, I realized that my delivery style wasn’t right for this. Lots of adjustments were needed for screen. It took me some days to learn what works and what doesn’t.

The biggest difference between on stage vs on screen is the distance from the audience. When you tell a story on stage, the closest audience member is still a few feet away from you. You need to exaggerate your facial expressions and body gestures to show your emotions to the audience sitting in the back. You may want to raise your volume, too. But on screen, you’re a close-up to every single person. They can easily catch your subtle movements and emotions. If you perform on screen as you do on stage, you may look silly. A little hand gesture that doesn’t bother us when you perform on stage can be a big distraction on screen.

Note: When I posted an article along with the picture back then, a member said to me, “Ah, that’s what you were doing!” She noticed that I wasn’t fully present at one point. (Yes, I was multi-tasking by taking the picture.)
Remember, even when you are not speaking, you are a close-up. Somebody is watching you!