I Dare Tell My Stories!

Who’s going to listen to my stories?

As a non-native English speaker, I always doubt about my English speaking skills. Even after living in the United States for over 15 years, there are still lots of words that I don’t know or cannot pronounce properly. (Those R’s and L’s are killing me!)

Do people understand what comes out of my mouth? Do they even want to listen to my stories in the first place?

Those questions swirl my brain from time to time.  Whenever somebody cocks their head to the side, I wonder if I’m giving them a hard time because I know that it can be challenging for some people to listen to those who have different accents and intonations.

Then, one day, my teacher, Jane Morris, shared Vincent van Gogh’s letter to his brother.

If one wants to be active, one mustn’t be afraid to do something wrong sometimes, not afraid to lapse into some mistakes. To be good — many people think that they’ll achieve it by doing no harm — and that’s a lie… That leads to stagnation, to mediocrity. Just slap something on it when you see a blank canvas staring at you with a sort of imbecility.

You don’t know how paralyzing it is, that stare from a blank canvas that says to the painter you can’t do anything. The canvas has an idiotic stare, and mesmerizes some painters so that they turn into idiots themselves.

Many painters are afraid of the blank canvas, but the blank canvas IS AFRAID of the truly passionate painter who dares — and who has once broken the spell of “you can’t.” 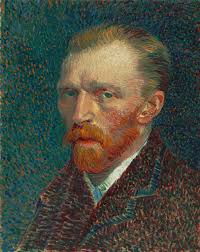 Life itself likewise always turns towards one an infinitely meaningless, discouraging, dispiriting blank side on which there is nothing, any more than on a blank canvas.

But however meaningless and vain, however dead life appears, the man of faith, of energy, of warmth, and who knows something, doesn’t let himself be fobbed off like that. He steps in and does something, and hangs on to that, in short, breaks, “violates”…

The doubtful thoughts still hit me sometimes, but I dare tell my stories!